You are in Home > About us > Success Stories 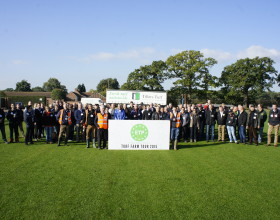 The European Turfgrass Producers Association (ETP), catering for the needs and instances of sod farmers around Europe, was founded in December 2014 and opened shop in January 2015. Our  first event, the inaugural ETP Farm Tour took place in Lincolnshire (UK) on 12th and 13th October 2015.  The event was based in Lincoln, close to two host farms, Tillers Turf and County Turf.

In the first event of its kind over 100 turf growers and industry delegates from 16 different European countries, came together to see how turf is grown in the UK, interact and network with each other, and enjoy the atmosphere of Medieval England in the historic city of Lincoln. We believe this confirms that the European sod industry welcomes the opportunity to get together within Europe to talk about turf, a central part of the ETP concept. You can find an album with some pictures from the event on our free-to-browse Facebook page.

Over dinner on the 12th, ETP President Tim Fell revealed the structure of ETP, along with its aims and manifesto, and its future plans, that currently include the organization of a 2nd ETP “Farm Tour” in Ginosa (IT) in September 2016 and a 1st ETP “Turf Show” in 2017 in Belgium.

Thank you all for making 2015 and ETP’s maiden event such a success !